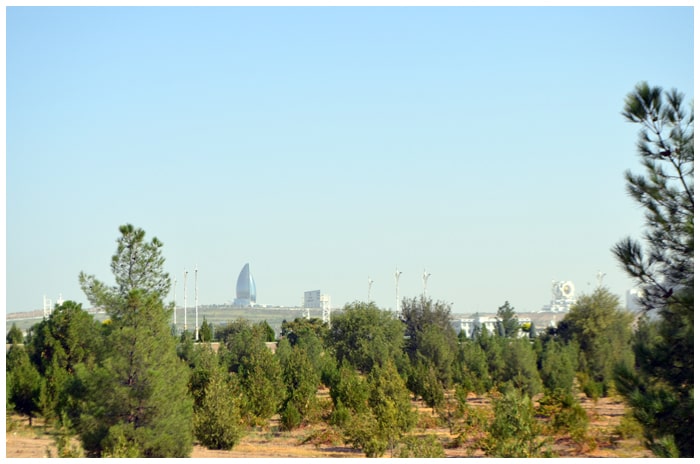 The Name of tour: Turkmen masterpiece

Day 1: Ashgabat
Today you will get acquainted with a group at the international airport of Ashgabat. After that you will explore the Ertugrul Gazi mosque. On the tour you will be able to see that this mosque is one of the most beautiful in Turkmenistan. During the tour, you will see that it was built in the Turkish style and is the largest in the capital. The mosque has 4 minarets. And it is named after the Turkic ruler Erturgul. The outline of the mosque resembles the famous Blue Mosque of Istanbul. Visiting the mosque struck by its scale and beauty.

Day 2: Ashgabat
After breakfast you  explore ancient Nisa. Old Nisa-a separate royal fortress on a hill, was named Mithridatkert ("fortress of Mithridates"), founded by Mithridates I or Mithridates II in the II century BC. Until the I century AD, it served as the burial place of the Parthian kings, until the younger branch of the Arsacids ascended the throne and Arbela became the royal tomb.  In the city were concentrated Palace and temple buildings, there was a Treasury, a huge storage of wine and warehouses with provisions. After that you will continue the tour with exploring Kow Ata underground lake. It appeared due to the features of rocks from the former seabed. Thanks to the limestone, dolomite, and anhydrite. As well as the tectonic forces that caused the sea to leave, raising these places above the water. A unique work of nature, which can rightfully be called one of the wonders of the world. Its name translates as "Father of the cave". It is connected with the so –called Kopetdag line of thermal springs located at the northern foothills of the Kopet-Dag along the tectonic fault line. Inside it has about 38 useful chemical elements, which makes the lake curative. And also all year round there is a uniform temperature from 33-38 degrees Celsius. After that you will transfer to village. You will come back to Ashgabat and have a rest.

Day 3: Ashgabat – Darvaza
This day you will explore the Carpet Museum. In the tour you will be able to explore that the art of carpet weaving has been passed down to people from generation to generation. Today, people can explore that there are different types of Turkmen carpets, and they each have their own style. The designs and patterns themselves are made up by women, and the saying goes, " Roll out your carpet and I'll read your soul." During the tour, you will learn that the 5 most common traditional drawings are part of the national emblem and flag of the country. For the Turkmen nomads, carpets were extremely important, covering the floor of the wagons and forming folding walls to protect them from the cold. Then you will continue tour with transferring to Darwaza.

Day 4: Darvaza – Kunya Urgench – Dashoguz – Ashgabat
After the breakfast you will have a tour in the significant site Kunya Urgench. During the tour, you can learn that the ancient city of Kunya-Urgench, was in the past the former capital of Khorezm, which was located in the northern Chatsi of Turkmenistan. Translated from the Turkmen language, Kunya Urgench is translated as the old city. In the past, it was located near the old bed of the Amu Darya River, and was on the main routes of the Great Silk Road. The first research began in 1929, and since 2005, the ancient city of Kunya-Urgench has been included in the UNESCO World Heritage List. After that you will take a train. This night you will rest in the train.

Day 5: Ashgabat
Upon arrival to Ashgabat you will travel to horse farm. Later we will visit the village of Gokdepe. Our tour clients will be able to find out that the Akhal Teke horse is a unique breed of horse that was bred on the territory of Turkmenistan already 5000 years ago. On the tour, you will explore that this is an ancient and incredible breed that has had a great influence on many breeds-the Arabian, Thoroughbred (or English racehorse), etc.And it is in a row with the thoroughbred horse and the Arab, among the thoroughbred breeds, as it is the reference horse and has not been crossed with other breeds for 5000 years. Our clients will also be able to discover that these horses are well adapted to the hot climate and can acclimatize perfectly in other conditions. After that you will travel to the city. You will also explore today cultural and entertainment center Alem.

Day 6: Flight
Transfer to the Ashgabat International Airport to board a flight to next destination.