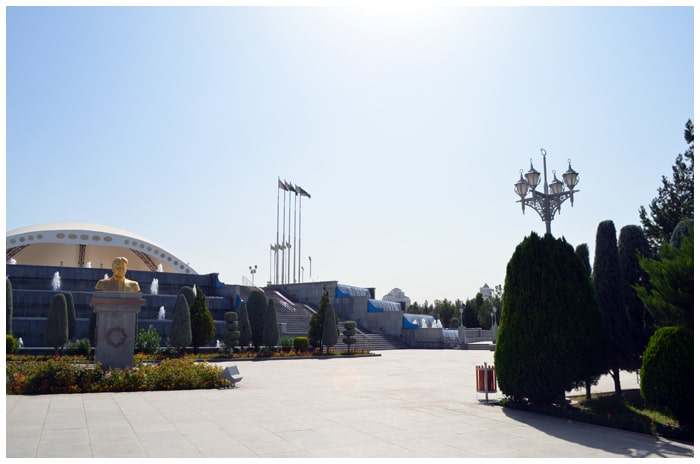 The Name of tour: Magnificent Mary

Day 1: Ashgabat
This day you will meet the driver and guide at Ashgabat International Airport. After that you will travel to the hotel. Ashgabat is the capital of Turkmenistan, the largest industrial, scientific and cultural center of the country. It recently entered the Guinness Book of World Records as the city with the largest number of buildings finished in white marble. Then you will travel to horse-farm show where you will explore the pride of the Turkmen people for Akhal Teke horses. You will discover the views and have a traditional tea break, Akhal Teke horse show program. Then you will transfer back to Ashgabat and discover the fascinating attractions of the capital.

Day 2: Ashgabat
In the morning you will start the tour with exploring Old Nisa, Gypjak mosque and mausoleum the last president of Turkmenistan. The next destination of the tour will be the State Museum of History. The museum opened the doors on 12 November 1998. Here are situated  seven permanent galleries incorporating history, present day culture, and ethnography. You will spend the night in the hotel.

Day 3: Ashgabat – Merv – Mary
This day you will have a breakfast and we will drive to Mary region which is located in East of Turkmenistan. Mary is a city in the south of Turkmenistan, on the territory of the Murghab oasis in the river delta; it is the capital of the Mary velayat. From the south, the city bends around the Karakum Canal. In 1884, with the arrival of Russian troops in Central Asia, Mary, which at that time was called by the beautiful ancient name "Merv", was, as in Ashgabat, formed a military-administrative center on the site of the Tekin settlement. Merv is the name not only of one of the oldest Asian cities, but also of the entire surrounding area in the old Murghab River delta. Since time immemorial, these lands have attracted people with their fertility and abundance of water. This night you will rest in the hotel.

Day 4: Mary – Talkhatan Baba – Yekedeshik Caves – Mary
In the morning you will travel to Talkhatan Baba. You will be able to see the beautiful Talhatan Baba, which is located near the Murghab River, near the city of Yolotan. This is the name of an intricately decorated brick mosque built in 1095 during the heyday of Seljuk rule in the region. During the tour, you can find out that the mosque is considered an exquisite example of this style of construction and one of the most well-preserved mosque,  who can show Saldujsk architect master class. The grave of the mystic sheikh Talhatan Baba is also located here. Then you will transfer to Yekedeshik Caves. Yekedeshik-the mysterious cave city of Ekedeshik is an architectural monument of Turkmenistan. Its appearance, as well as the author of its creation, are not known to anyone. Yekedeshik, this is a huge cave complex. These caves are located in the Mary velayat (Tagtabazar etrap). They are cut in the steep banks of the Murghab in sandstone. It is still a mystery about their true age, purpose, method of construction, and how the ancient people climbed there. There are hundreds and thousands of ancient caves dug by man in the world. Some of them are very popular with tourists. This night you will rest in the hotel.

Day 5: Mary – Margiana (Margush) – Mary
This day you will transfer to Margiana complex. Margush, or Margiana in Greek , is a semi-mythical country, which first became known from a couple of lines carved on the famous Behistun rock by order of the Persian king Darius I: they say that the country of Margush was restless, and I pacified it. Another mention of Margush is found in the holy book of Zoroastrianism-the Avesta: it says that in the country of Mouru they profess Zoroastrianism. But sometimes two lines are enough to start the research. What has already been discovered in Gonur is impressive: clay and ceramic vessels, gold and silver jewelry, as well as a unique mosaic with elements of painting, which has not yet been found anywhere else except in Gonur. On some clay vessels there are symbols, the purpose and meaning of which is not clear. Professor Sarianidi does not give up the idea that the Margush alphabet will also be discovered. Overnight is in a hotel.

Day 6: Mary – Ashgabat
After breakfast you will have a breakfast, after that you will travel to Ashgabat. Along the way you will make a stop at Annau. During the tour you will explore once great temples of Seyit Demaletdin Mosque that was erected in 1456 which was damaged to in the 1948 Earthquake. You will explore the Temples that are situated on a hill just above the prayer mosque on the grounds. In the small city of Annau just East outside of Ashgabat on N37 Highway that goes to Mary. There isn't any fee to enter, the mosque of the night is in a hotel.

Day 7: Flight
Night transfer to the Ashgabat International Airport to board a flight to next destination.